by Admin on August 26, 2014
Sports
1395
previous article
Buying An Older Car: Five Things To Watch Out For
next article
Manchester City eases past Liverpool in Premier League 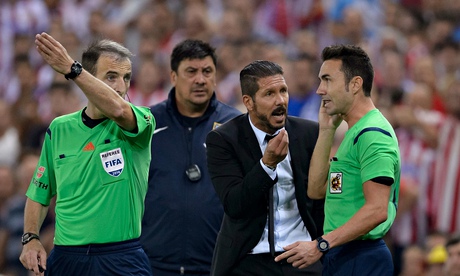 The Spanish Football Federation has suspended the Atlético Madrid coach, Diego Simeone, for eight matches after he was sent off during the second leg of the Spanish Super Cup.

The federation announced its decision on Monday, three days after the Spanish champions beat Real Madrid 1-0 to win the Super Cup 2-1 on aggregate.

The assistant coach, Germán Burgos, will take over from Simeone while he serves his suspension.

Simeone was ejected in the 25th minute of the second leg at Vicente Calderón Stadium for dissent after he vociferously called for Juanfran Torres to be allowed back on the pitch after he had been treated on the sidelines. The defender had received treatment for a cut on his lip that had bloodied his shirt and was waiting to go back on.

Simeone told the media before Monday’s opening La Liga game against Rayo Vallecano: ‘“What happened the other day is a closed issue. Reiterating and talking about the same thing is not good. The people who have to make a decision will do what they believe to be fair. When one makes a mistake it’s fair to pay for it.”

Addressing the possibility of Burgos having to take over on the touchline, Simeone said: “We’ll try to find the best way to communicate. Germán has the capacity and confidence; it gives me peace of mind that we understand football in the same way. He will sit on the bench and I will see it from another place.”