by Webmaster on February 14, 2018
Sports
1139
previous article
Why Your Company Needs A New Logo
next article
Interview with talented musician Sean Cos Mason 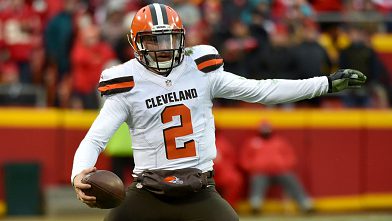 Comeback Season is beginning for Johnny Manziel in an unlikely place.

At a time when the Hamilton Tiger-Cats of the Canadian Football League want Manziel to agree to terms, Manziel has agreed to terms with The Spring League, a short-season developmental league based in the U.S.

“We’re excited to have such a dynamic player in Johhny Manziel taking part in The Spring League,” Brian Woods, CEO of The Spring League, said in a release. “We believe our platform is the ideal forum for Mr. Manziel to enact his NFL comeback.”

Launched last year, The Spring League essentially is a pre-draft showcase for available players who may end up being signed by NFL teams after the draft, ostensibly to fill needs that aren’t satisfied via the process of picking incoming rookies, one round at a time.

In 2016, all Spring League games were played at The Greenbrier, in West Virginia. This year, the games will be played in Austin, with four games played over a two-week period.

“Football has been a huge part of my life for as long as I can remember,” Manziel said in the release. “Sometimes you take for granted how much you value something until it’s gone. My goal is to make it back to the NFL and I realize I have to earn that privilege. The Spring League has provided me with a great opportunity to play ball again, and ultimately, that is all I want to do. I miss the competition.”

Why is Manziel pursuing this path? Put simply, teams want to see him in shape and playing, with pads on.

So that’s what they’ll get. Twice.

In the realm of corporate group assembling, it’s the present day, front line thoughts that truly lead the route in development and association. We are continually anticipating seeing better approaches for making and protecting a casual, innovative [...]

New local channel Essex TV seeks sports personalities to feature on their channel as their creative team prepares to introduce over 100 hours of sports programming a year. The new consortium backed channel which launches on the 28th of April will focus on [...]
Comments
Leave a reply