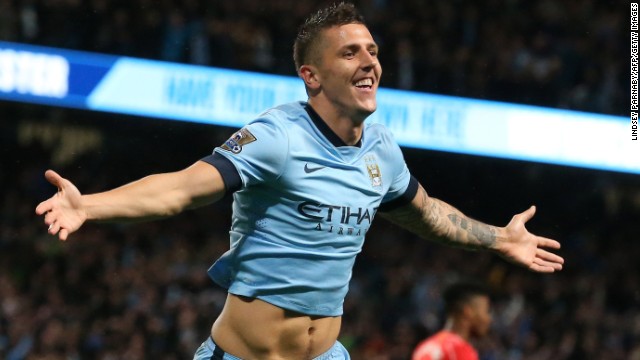 Mario Balotelli made most of the headlines prior to Liverpool’s game against Manchester City in the Premier League, but it was another striker — a forgotten one — who ended up as the star attraction hours later.
That was Stevan Jovetic.
Jovetic was signed with much fanfare from Fiorentina a year ago for about $36 million, but injuries and the form of other strikers at City meant he only made two league starts in 2013/2014.
Inserted into the starting lineup by manager Manuel Pellegrini, Jovetic netted twice in City’s 3-1 win in the showdown between teams that finished 1-2 last season.
“It wasn’t so many beautiful moments until now because I had so many problems last year,” Jovetic told Sky. “But I don’t want to think about that. That’s past.

“Now I just want to enjoy with this team, these players to win more titles.”
Substitute Sergio Aguero got City’s third, with Liverpool replying through Pablo Zabaleta’s own goal with less than 10 minutes remaining.
Indeed, only when falling behind by three goals did Liverpool — which capitulated to give City the title in May — come to life.
It was a far cry from the corresponding fixture last term, when Liverpool largely ran the show in an entertaining contest — a 2-1 City win — on Boxing Day.
Liverpool opted for a more defensive approach Monday and couldn’t call on the flair of Balotelli, the flamboyant, controversial — though not as controversial as the man he is replacing, Luis Suarez — Italian international. He signed from Milan earlier Monday.
The result left City with two wins from two games, identical to the side expected to challenge Pellegrini’s men for the title, Chelsea. Tottenham and Swansea are the only two other teams with perfect records.
Jovetic pounced from close range after Dejan Lovren’s poor clearance to give City a 1-0 lead at the break.
And shortly after the break, in the 55th minute, Jovetic converted Samir Nasri’s pass.
“Last year unfortunately (Jovetic) was injured a couple of times,” Nasri told Sky. “We saw that in pre-season he was on fire. I think it’s just the start of a big season for him.”
Aguero, on the pitch for a shade under 30 seconds, increased the lead after a perfectly weighted ball from Jesus Navas in the 69th before Liverpool’s consolation effort in the 83rd.