by Admin on November 24, 2014
Sports
1798
previous article
16 killed in northwest China coal mine collapse
next article
Chuck Hagel to resign as US defence secretary 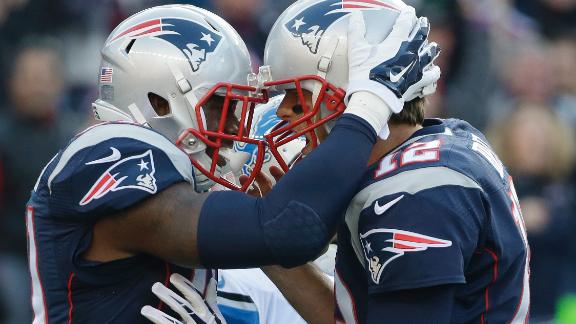 FOXBOROUGH, Mass. — The New England Patriots showed off their passing game one week after a brilliant rushing performance.

The outcome was the same: a blowout win over a top team.

Throw in a defense that held the Detroit Lions without a touchdown and two outstanding special teams plays, and the team with the AFC’s best record rolled over the team with the NFL’s stingiest defense, 34-9 on Sunday, for their seventh straight win.

“Everyone is linked together,” quarterback Tom Brady said, “so we all feed off each other — offense, defense, special teams.”

More from ESPN.com
Darrelle Revis is the queen piece on the Patriots’ chess board, a player who seems to be effortlessly running the route before the receiver himself, Mike Reiss writes. Story

The Lions’ offense continued its downward trend as opportunities for touchdowns turned into field goals and another loss, Michael Rothstein writes. Story

Brady threw for 349 yards and two touchdowns exactly 14 years after his pro debut in another 34-9 game against the Lions. In that Thanksgiving meeting, the rookie was a late-game replacement for Drew Bledsoe in Detroit’s win.

On Sunday, LeGarrette Blount rushed for 78 yards and two short scores and the Patriots improved to 44-3 in their last 47 regular-season home games.

The Patriots (9-2) have such depth that Jonas Gray didn’t even play one week after rushing 37 times for 201 yards and four touchdowns in a 42-20 win over the Indianapolis Colts. He was sent away from Friday’s practice for reporting late, just one day after Blount signed. Blount was cut by Pittsburgh last Tuesday, the day after he walked to the locker room as the Steelers were lining up for the last play.

Blount rushed for 772 yards for the Patriots last season, but didn’t re-sign.

“He’s never been a problem for us,” defensive tackle Vince Wilfork said. “It was a good welcome back for him today.”

“We blew a lot of coverage,” Detroit linebacker DeAndre Levy said. “They sped up the tempo a bit and I think we lost our composure.”

The Patriots routed a division leader for the third straight week, following wins over Denver and Indianapolis. They visit Green Bay, which began the day tied with Detroit for the NFC North lead, next Sunday.

For the second straight week, they lost to a conference leader, having fallen to Arizona 14-6 a week earlier

Beating The Leaders
The Patriots have faced six teams that were division leaders or co-leaders at the time of game this season. New England has won those games by an average of 22.2 points per game.

“I think we’ll figure that out at the end of the year,” quarterback Matthew Stafford said.

But they didn’t score a touchdown in either game.

“I am not concerned,” Lions wide receiver Calvin Johnson said. “We still have time to get things going.”

The Lions bore little resemblance to the team that had allowed the fewest points in the NFL. They had given up just 68.6 yards rushing per game, so Brady threw frequently — and quickly to avoid the rush.

He finished with 38 completions in 53 attempts with one interception, with Julian Edelman catching 11 passes for the highest-scoring team in the NFL.

“Ever since I’ve been here, the coach has put it in my ears that football season starts after Thanksgiving,” Edelman said.

The Patriots have had quite a head start.

The Lions managed just three field goals by Matt Prater as Stafford completed 18 of 46 passes for264 yards and one interception while the Patriots shut down his two star receivers. Golden Tate had just four catches after entering the game third in the NFL with 68. Johnson was held to four receptions for 58 yards.

“The coaches believe in us at the cornerback spot, man, and set up the perfect matchups for us,” Patriots cornerback Brandon Browner said.

Special teams gave the Patriots a huge boost in the first half when Ryan Allen boomed a 66-yard punt and Danny Amendola returned a kickoff 81 yards.

Detroit lost 6 yards on the series after the punt. Then, New England took a 7-3 lead on the next possession on Brady’s 4-yard pass to Tim Wright.

The Lions came back to get a first-and-goal at the 3, but managed just a 20-yard field goal by Prater.

Amendola’s long return on the subsequent kickoff set the Patriots up at the Detroit 22. And when they also got a first-and-goal at the 3, they took full advantage on the next play with a touchdown run by Blount less than a minute after Prater’s field goal.

Even when Detroit put New England in poor field position, a punt by Sam Martin that went out of bounds at the 7, the Patriots couldn’t be stopped. They marched 93 yards, scoring on an 8-yard pass from Brady to Wright for a 21-6 lead.

And when Prater’s 53-yard field-goal attempt went wide to the left with 35 seconds left in the half, consecutive completions to Rob Gronkowski of 24 and 23 yards set up Stephen Gostkowski’s 35-yard field goal for a 24-6 halftime lead.

The Patriots have won six games by at least 22 points. … The Lions had won four straight before losing consecutive games for the first time. … The Patriots clinched their 14th winning record in a row.