by Admin on August 30, 2014
4106
previous article
Emma Stone Is Officially Going to Play Sally Bowles in Cabaret on Broadway
next article
Tesco issues third profit warning of 2014 with dividend slashed by 75% 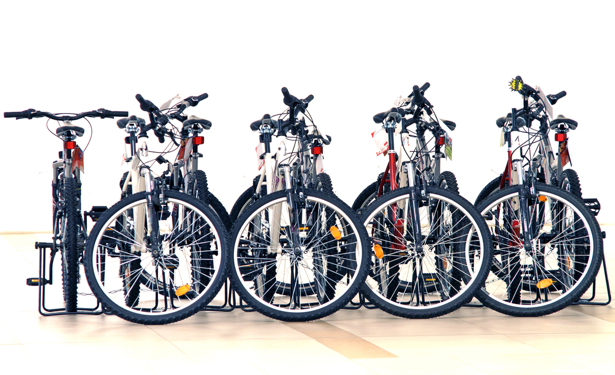 Bicycle lanes, bike sharing stations, and helmet-clad commuters. Such sights are nothing new in European cities that have long set the bar high for public spending on cleaner and more efficient alternatives to cars. And in recent years, residents of the classically car-centric cities of Asia, Latin America and the U.S. are increasingly traveling on two wheels instead of four. Los Angeles, for instance, has a plan to create more than 1,600 miles of bicycle lanes and paths; Mexico City has a popular program that shuts down the city’s main boulevard for cyclists once a week; and Hangzhou has built the largest bike-sharing system in the world. “That’s a major policy change in China, where a number of cities had banned bicycles on downtown streets just a few years ago,” say Credit Suisse analysts Jeremy Chen and Chris Shieh.

This is all good news for the bicycle industry. The global bike market is expected to grow from $51 billion in 2014 to $65 billion in 2019 – a 5.2 percent annual increase – according to a report by NPD Group. That’s partly due to an improving global economy; after all, bicycle sales have historically moved in tandem with GDP growth. But it’s also because demand for two-wheeled transportation is on the rise amid worsening automobile traffic, high gasoline prices and greater concern about pollution. The shift might even be traced back to the 1997 adoption of the Kyoto Protocol, which obligated nations to reduce greenhouse gases: the global bicycle market has grown an average of 4 percent a year since then compared with 2.5 percent a year during the previous two decades, according to Credit Suisse.

China, the world’s largest producer of bicycles, stands to benefit from the increased demand. But it won’t be the only one. Although the country produces 67 percent of the world’s bicycles, most of them are low-end units that sell for less than $100 apiece. The real winner is actually Taiwan. Better known for making semiconductors than bicycles, Taiwan’s history with bicycles nevertheless goes back to the early 1970s, when the island earned the nickname the “Bicycle Kingdom” after its exports increased sharply thanks to original equipment manufacturer deals with companies such as Schwinn. The label held true in the 1980s when Taiwanese production overtook Japan’s, although production flagged in the 90s amid a strengthening of the New Taiwanese Dollar and the onset of competition from mainland China.

Instead of engaging in a race to the bottom, Taiwan’s largest bicycle makers instead ceded the low end of the market to China and began shifting their focus to mid- and high-end bikes. As a result, the average selling price of Taiwan’s bikes has increased nearly five-fold over the past decade, and the island’s total bike exports nearly tripled, to $1.2 billion in 2009 from $480 million in 2002. Taiwanese companies Giant and Merida hold 10 and 4 percent market share, respectively, of the global market for $2,000-plus bicycles.

Ironically, Chinese consumers—who account for 30 percent of global bicycle demand—are some of Taiwan’s biggest customers. Sales of high-end bikes in China tripled from 1 million units in 2008 to 3 million in 2013 as the population grew wealthier and sought high quality bikes for commuting and recreation. Credit Suisse predicts annual growth of 11 percent between 2014 and 2018, and the two best-selling brands in China are Taiwanese.

But it’s the U.S. and Europe, which together account for more than 50 percent of its total sales, that are “the bread and butter for Taiwan bicycle makers,” Credit Suisse’s Chen and Shieh recently wrote in a report titled “Proudly Made In Taiwan.” And those markets are strong: Sales to the U.S. and Europe are on track to grow between 10 and 15 percent a year between 2013 and 2016, compared to just 5 to 7 percent annual growth coming out of the Great Recession.