George Clooney to wed in Venice in ‘couple of weeks’ 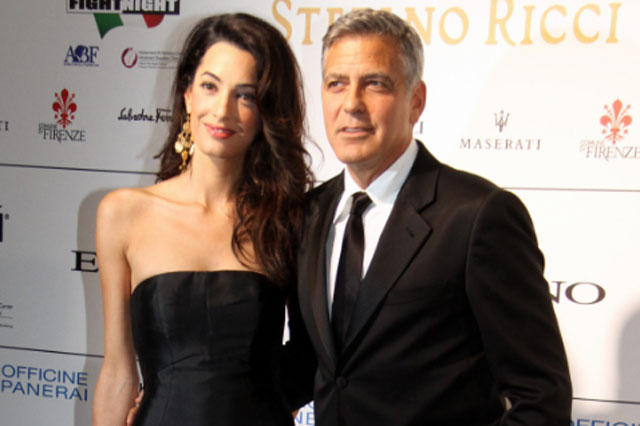 George Clooney says he is to wed his fiancee Amal Alamuddin in Venice in the next few weeks, less than a year after the 36-year-old lawyer began dating Hollywood’s most eligible bachelor.

The heartthrob US actor’s spokesman confirmed the wedding venue but not the date after Clooney let slip his plans to marry the British human rights attorney in the picture-postcard Italian city.

“I met my lovely bride-to-be here in Italy, whom I will be marrying in a couple of weeks, in Venice of all places,” People magazine quoted him as saying at an awards ceremony Sunday in Florence, Italy.

Reports suggested they could tie the knot on September 26, but the A-list actor’s spokesman Stan Rosenfield played this down, telling AFP: “He did not give a specific date.

“I can only confirm that he is getting married in Venice,” he said.

During Sunday’s event, the couple appeared very much in love, according to celebrity bible People.

Clooney put his arm around her shoulder and carefully brushed her hair back whenever her “flowing locks” fell out of place as she laughed.

Oscar-winning Clooney, one of Hollywood’s most sought-after bachelors, announced in April that he was engaged to his then 36-year-old girlfriend.

News that Alamuddin had stolen 53-year-old Clooney’s heart caused a global media frenzy and furious speculation about when they would wed.

They had come out as a couple last October in London, and since have been seen together in New York and on trips to Tanzania and the Seychelles.

Clooney was married to US actress Talia Balsam for four years between 1989 and 1993 but has shown little interest in settling down since, instead going through a string of younger model and actress girlfriends over the years.

Like his fiancee, he has long shown interest in human rights issues such as the humanitarian crisis in Darfur.

In August Alamuddin, who is fluent in Arabic, French and English, declined her nomination to join a commission probing Israel’s Gaza offensive.

The British law firm that employs Alamuddin sang her praises when their engagement was announced.

Chief executive Robin Jackson said: “Amal has been utterly wonderful since she arrived in chambers.

“She brings a bright light to everything she is involved in, and I am so delighted at her happy news.”

Alamuddin’s clients have included former Ukrainian premier Yulia Tymoshenko, whose detention she challenged before the European Court of Human Rights, and WikiLeaks founder Julian Assange, during his extradition proceedings.

Leading rights lawyer Geoffrey Robertson, who worked with Amal on the Tymoshenko and Assange cases, said she was “respected and admired” by everyone at the firm.

“Amal Alamuddin is a brilliant and passionate defender of human rights who has put in the enormously hard work necessary to improving them,” he said.

When to Hire a Professional Photographer

Need your photos to be the most ideal? Your first slant may be to take care of business yourself. Be that as it may, now and again an expert photographer can simply make a superior showing with regards to for you. A few circumstances simply require a [...]

Many individuals are yet to comprehend present day conceptual art. This is a remarkable sort of art that tries to pass on the encounters of existence without words. It utilizes distinctive types of shading, surface, sytheses and designs that many [...]

Top five artists who are under rated in the bay Jay lyric -With songs like “Feeling You Feeling Me”, “Rich City Kids”, “For the People” and “Free My Mind, Now I Get It”, she explores lyrical themes of love, youth, community, self-worth and identity. [...]
Comments
Leave a reply

3 Great Ways To Increase Your Youtube Video Hits For Free