by Admin on September 5, 2014
0
6028
previous article
Microsoft Surface Pro 3 review
next article
Ferrari celebrates 60 years in US on Oct. 12 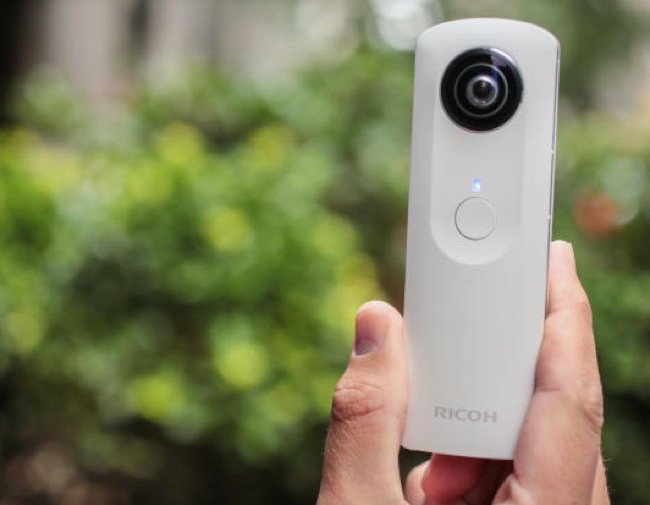 The Ricoh Theta 360 Degree Spherical digital camera is a compact device with a very specific use; capturing full spherical photos. Theta touts its convenience, considering most cameras require lining up images to achieve a flat panoramic photo. With the Theta, users can photograph an entire scene or the floor, ceilings, and all four walls of a room with the touch of a button. However, the question isn’t really if the Theta achieves its goal — which it does — it is whether or not spherical photos are worth the camera’s steep $400 price tag.

Build and Design
Boasting an easy to use interface, the Theta will deliver a spherical photo with the push of a button. Ricoh uses the word “spherical” to describe the photos. In everyday terms, they are 360 degree representations of the surrounding area, allowing users to pan and zoom around a scene as if they are standing right there. Users can view the photographs on iOS, Android, PC, and Mac with the Ricoh Theta apps.

The Ricoh Theta camera features built in Wi-Fi and 4GB of memory. Weighing in at just about .20 pounds and measuring 1.65 x 5.08 x .9 inches, the Theta is a relatively small camera. It’s lightweight, and the white casing is slightly rubberized, making it comfortable to hold in the hand. As a fun accessory, it won’t add too much weight to whatever users are already carrying. The Theta can easily be slipped into a purse or a pocket for on-the-go photography.

The front of the camera features the lens and shutter button and the back features the other side of the lens. On the right hand side of the device, users will find the power and Wi-Fi buttons with a status located above the power button and below the wireless button. On the bottom of the camera are the tripod mount hole and the microUSB port, which is hidden behind a plastic flap.

The 4GB of onboard storage will allow for around 1,200 image captures, according to Ricoh, depending on the shooting situation. The Theta boasts an automatic ISO range of 100-1600 with a lens speed range of 1/8000-1/1.75 seconds Ricoh is keeping quiet on the specs of this device in terms of its sensors and image processors, but reviewers put the camera at anywhere from 5-6.5 megapixels based on uploaded photos.

Two microphones can be seen on the top of the device, which Ricoh has stated are currently inactive, but will become active during a later software release. This implies that there could be video recording in the Theta’s future.

One thing that could become a problem was the sleek design of the camera. Because the camera is tall and thin, the lens seems pretty vulnerable to damage. Ricoh includes a carrying case in the box, but when the camera is in use, users will want to be careful not to drop the Ricoh since the lens is encased in glass that bulges out on the front and back. The lens’ exposure may also be a problem since taking photos remotely with the app requires users to stand the camera upright in any location. A simple bump could knock the camera off its balance, and it will fall over directly onto either lens. An included stand might be a helpful way to reduce potential damage. Ricoh does offer a strap attachment as an optional accessory, but it does not include an actual strap.

Menus and Modes
Keeping with the basic aesthetics of the design and function, the camera itself does not feature any menu or modes directly on the device. A few settings — including brightness — can be adjusted through the compatible app; however this is only available with the iOS app as of this writing.

Via the app, users can manage their Wi-Fi and social media settings, with the option to directly connect to Facebook, Twitter, and Tumblr. Albums and a camera roll are also available through the app, quickly connecting users to their photos. The best part of the compatible app is it will immediately display any photos taken with the Ricoh Theta once the image is processed. Other than acting as an ad hoc viewfinder, the Theta app offers a few bare basic functions within the niche of panorama/spherical photography.

Display and Viewfinder
As previously stated, the camera does not feature an LCD display to immediately view photos, meaning users need a second device in order to instantly view any photos they take. Instead, photos are synced automatically to connected devices and can be viewed on a smartphone, tablet, PC, or mac. With the iOS and Android app, users can also remotely control the Theta from their mobile device.

There isn’t an easy way to frame photos, but since it captures spherical photos, framing isn’t that necessary. The app only displays photos after they are taken, so there is no way to view an image before shooting. Since users won’t be looking to frame photos with much intention, the lack of viewfinder isn’t really a problem. It’s more of an aim, shoot, and see what you get type of camera. After viewing the photo, users can make changes to the camera accordingly using the app, or physically moving the location of the Theta.

Photos display via the compatible app as “spherical” images, so instead of a panoramic view as one wide photo, the image curves up into a circle with a slight fish eye perspective. Photos can appear a bit disorienting at first, but it really does make for a cool effect when viewed through the Theta app.

Viewing the images is interesting, and the app offers a 3D effect so you can see the depth and dimension of each scene. Users simply click and drag their mouse (or finger on a smartphone or tablet) around the image in the Theta app to see every corner of the image. It makes the user feel as though they are right in the room, rather than a flat 2D representation. It’s safe to say the Theta offers a unique alternative to the standard panoramic offerings on most smartphones and digital cameras.

Performance
First, we paired the camera with an iOS device using the app by selecting the Wi-Fi network emitted by the Theta, and pairing the two devices. If the smartphone or tablet is already connected to another Wi-Fi network, users will have to go in and manually choose the Theta network. The password is part of the serial number located on the bottom of the camera, and is necessary to connect to the camera’s hot spot on first use.

The status lights indicate the camera’s state, with a steady LED light indicating it is ready to photograph. If users get a slow flashing blue light, it means that the camera is in sleep mode, which occurs after five minutes of idle time. A faster flashing blue light indicates that the camera is processing the last photograph taken, and that users will need to wait a minute. A flashing red light means that the firmware is updating while a steady red light tells the users to recalibrate the camera’s compass by moving it in a figure eight pattern. When the internal memory is full, the camera status light will go out or fail to light up at all.

The Theta works by holding out the camera — or setting it upright in the center of a scene — and pressing the shutter button either manually or remotely via the Theta app. It only takes a second or two, and users won’t have to worry much about framing the photographs since it will capture the entire room.

Image quality is decent, especially in well light out door settings, and some pixilation can be seen on photos when zooming in close. However, it isn’t exactly $400 worth of image quality when considering the type of camera one can purchase with that money. Especially since photos inside came out dark and grainy even if there was a decent amount of lighting. This camera would not work well in low lighting or dark rooms, unless users got creative with an external flash. There are a number of high quality digital camera options in the price range that offer more than one novelty function.

Scanning around the capture images is fun, especially since it creates a picture that a regular digital camera certainly will not capture. The only part of the photo that looks strange is right where the camera should be. The Ricoh does not photograph itself in the image, so the user’s hand will wind up looking a bit enlarged and oddly shaped. This can be avoided, however, by the use of the remote app, but users will still be able to see a white streak where the camera stood and its shadow.

Conclusion
The idea of capturing spherical photos at the touch of a button will most likely appeal to any photographer, but the real question is whether or not it is worth the $400 price tag for the camera. The price is a little steep for what is more of a novelty device rather than a serious photography accessory. While the images are certainly fun and unique, they don’t offer much in the way of image quality and usability; anyone that wants to view the image has to have the app or computer software to view them as 3D images. So forget printing out any favorite shots for a photo album or to frame on a wall, these images will only be share via smartphones, tablets, and computers.

Overall, the Theta creates unique images that would be hard to capture any other way. It is an easy, accessible, and fast way to capture an entire room or scene in one shot. Landscape enthusiasts and realtors may find it more appealing than the average user. But for the casual user, it won’t be worth the high cost to take photos of a party or get together. Sure, one it will be cool to show off one or two photos to friends and family, but it will be severely lacking when it comes time to take a group photo or easily share images with one another after a gathering.

Price
Limited use
Average image quality
Bottom line
Anyone looking to purchase the Ricoh Theta 3D Spherical digital camera will want to consider the cost, image quality, and limited capabilities before jumping in.