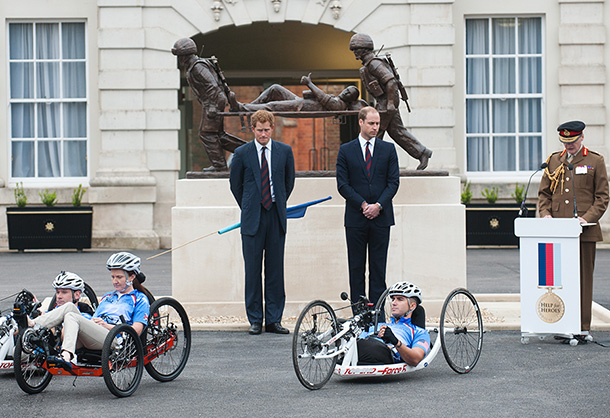 Prince Harry met with some of the wounded servicemen and women hoping to take part in his Paralympic-style sporting event, the Invictus Games, during a visit to Tedworth House on Tuesday.

The 29-year-old royal went along to the Help For Heroes rehabilitation centre in Wiltshire as trials began to select 100 members of the British Armed Forces to compete in the Games in September.

Harry met with around 25 men and women, hoping to the part in the wheelchair rugby, cycling and indoor rowing events. They included military veteran Jamie Hull, and Marine Don Maclean, who said of his involvement, “As I will be leaving the Royal Marines in July, the chance to be selected for the Games would be a highpoint in my recovery.”

Harry, who has served two tours in Afghanistan, had nothing but admiration for the competitors. “These men and women are fighters by nature,” he said.

“The intense physical training and competitive spirit that will be forged inside this team as they prepare to represent their country in the Invictus Games will, I hope, go some way to helping the recovery not only of those who hope to be selected here today, but also inspire others along the way.”

Harry launched the Games back in March. After inaugurating the US Warrior Games last year, which sees wounded servicemen and women from the US and Britain compete in different sporting events, he decided that he wanted to bring something similar back to the UK.

The Royal Foundation — the charity established by Prince Harry, Prince William and the Duchess of Cambridge — provided £1 million of funding for the Games

The Invictus Games were put together in just ten months, with £1 million of funding for the project provided by the Royal Foundation, the charity established by the Duke and Duchess of Cambridge and Prince Harry.

“Now is the time for the public to really get behind these Games and show their support for those who will be the real stars — the competitors.”

It was this time a year ago that Harry and his brother Prince William opened Tedworth House in Tidworth. The royals charmed the crowds and spoke at length with the injured and sick servicemen and women and their families.

The centre is one of four new units in England which will offer respite care and rehabilitation to injured and sick service personnel, veterans and their families.