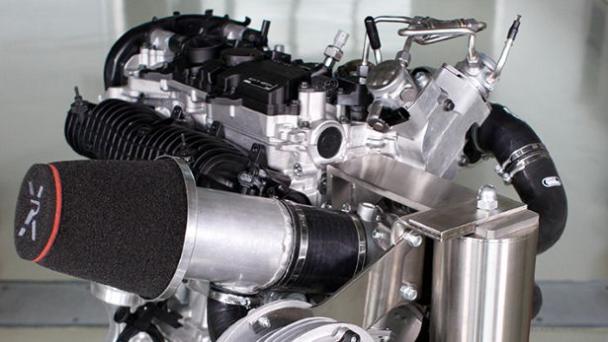 Volvo has unveiled a new powertrain concept that proves one of two things; a) they have a unique sense of humour, or b) an upcoming hot hatch will be able to accelerate to the moon.

Well, we can hope, anyway. It’s a new engine called ‘Drive-E’, and comes with a headline notice: it will produce “no less than 450bhp”. Just to be clear, that’s 450bhp from a 2.0-litre, four-cylinder engine.

“Our aim was to deliver the most advanced four-cylinder engine in the industry,” says Dr Peter Mertens, senior VP for R&D at Volvo. Development partners included AVL, Denso and of course, those lovely chaps over at Polestar Racing.

So, there’s a four-cylinder motor at heart. The engine gets two parallel turbochargers, fed by an electrically powered turbo-compressor. The turbo-compressor doesn’t feed the cylinders, but instead spools up the two turbos.

Then there’s a new fuel system with a dual fuel pump pressured at 250 bar, to create something very powerful indeed. But responsive too, we’re told.

“There are several high power small size applications where one large turbo is used to create a high level of power available from other manufacturers,” explains Michael Fleiss, VP of powertrain engineering at Volvo, “but the driving experience suffers due to slow engine response.” Volvo’s promises to be better.

It’s small, and – says Volvo – will be able to improve weight distribution and lower the centre of gravity in whichever application it’ll be used in, “whether it is a race car or a street car”.