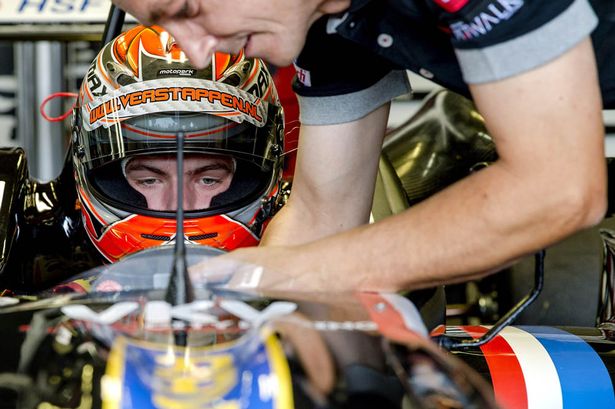 The 16-year-old Dutchman, a former kart champion, will become the youngest F1 driver in history when he lines up for Toro Rosso at the opening race of next season aged 17 years and five months.

He has contested less than 50 track races although he has been a kart champion and racer for over a decade.

The Red Bull B-Team announced he will replace Frenchman Jean-Eric Vergne next March as teammate to Daniil Kvyat.

The Dutch wonderkid, 17 in September, who fended off offers to join the Mercedes development programme, has been a member of the Red Bull scheme for less than a week.

And eight wins in 27 European Formula 3 outings means he has had his qualifying F1 super licence only a matter of months.

He drove a racing car for the first time professionally last October at Pembrey in Wales.

“My dad drives me everywhere because I’m not old enough to drive on the roads yet,” said Verstappen.

If it happens he will beat the record for the previous youngest F1 racer, Spaniard Jaime Alguersuari who was 1Despite his age he has proved impressive this season winning eight times in 27 rounds of the ultra-competitive F3 series, including a six race winning streak and has been dominant in the wet.

He is currently second in the championship, 77 points behind series leader Esteban Ocon, with six rounds left.

“My father, Jos Verstappen, raced in Formula 1 for a decade. When I was three years old he took me to a kart race and that’s when I knew I wanted to race also,” said Verstappen.

“My father wanted to wait till my sixth birthday, but I was so persistent that I got in a kart for the first time at four years old.”

“My father has always been closely involved in my career, from the very start: as a coach, mentor, mechanic, manager and taxi-driver, since I’m not old enough to have a driver’s licence yet,” said the 16-year-old.

“My aim is to become Formula 1 World Champion.”

In his first full season of championship track racing Verstappen admitted he had even surprised himself.

“Actually it has,” he added.

“I didn’t expect to be able to adapt myself that quickly to an F3 car and to be on pace immediately.”

Ex-F1 Dutch ace Jan Lammers argued he is not too young to race in F1. “In terms of age, it can be very easy,” he said.

“At the age of 4, Max was already in a kart and the transition from Formula 3 to Formula One is not illogical.

“Alain Prost, Kimi Raikkonen, myself, we all did it. No one should forget that Max is a talent of the highest quality.”